A+ A-
Print Email
The Independent Order of Odd Fellows, also known as the Three Link Fraternity, is a worldwide altruistic and benevolent fraternal organization by which men are banded together as brothers and pledged to assist each other and those in need. Our motto is friendship, love and truth. 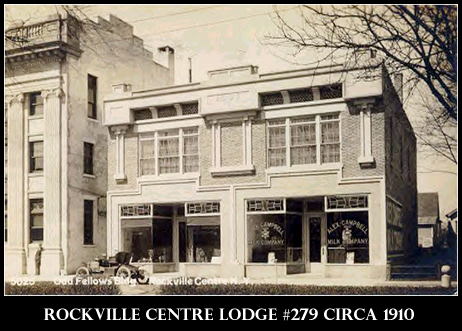 The Story of Rockville Centre Lodge #279

The Rockville Centre Lodge#279 of the Independent Order Of Odd Fellows was organized February 15, 1888 in a small hall over the barber shop of the Lotz Hotel located on North Village Avenue next to the railroad tracks. The men who organized the lodge were: Issac W. Dean, Frank Hunter, Freeman E. Gayer, G. Byron Latimer, Herman A. Delins and Orlando C. Baldwin. Issac W. Dean was the first Noble Grand of our lodge.

The first home of our lodge was burned on May 12th, 1888, but most of our regalia and paraphernalia was saved. After the fire the lodge met in Institute Hall, Village Ave. and Observer St. (now Sunrise Highway). The Odd Fellows occupied this hall for a few weeks and then moved to the 3rd floor of the Antheneum Building, which was on the northeast corner of Sunrise Highway and North Village Ave. The room was arranged especially for us. The lodge made this its home until 1896, when we moved to the upper floor of the Munk building. Ten years later in 1906 the lodge purchased this present piece of property for $5000.00. In the spring of 1909 we moved back to the Antheneum building and remained there for one year. After a few proposals the building committee decided on the plan for this present structure. On New Years Day 1910 the corner stone was laid with a brief ceremony where Village President (now called the mayor) William Richensteen said a few words. Present at the ceremony were visiting lodges from Jamaica, Hollis, Woodhaven, and Far Rockaway, Queens as well as Hempstead and Invood, Long Island.

On May 11, 1910 the first meeting was held in this lodge building, at that meeting 100 candidates were initiated joining the membership of over 350. The Liquidation of the mortgage was held November 17, 1916 leaving our lodge free and clear. At that time a banquet was held at the Rockville Centre Club, now the Masonic Temple, over 700 members and friends wer in attendance. In 1964, Merrick Rd. was widened from two to four lanes, when that was done the lodge lost over 12 feet from the front of the building, unfortunately the beautiful old front facade tha adorned the village for over 50 years was destroyed.

Over the years minor upgrades were made, but after 85 years the 2nd. floor or temple was in need of a major renovation. After many discussions between trustees, officers and members of the lodge plans to return the lodge to its old charm wer decided upon. In early 1997 the project begun and three months later the lodge was finished. On March 20th, the members celebrated their accomplishment by having a charity St. Patrick's Day Party, where members, friends, and family enjoyed the new lodge.

The Rockville Centre Lodge is now experiencing a rebirth, although it would be hard to achieve the membership that once was our lodge is growing and with that we are able to fulfill our motto "To educate the orphan, relieve the distressed, visit the sick, and bury the dead." Something that this lodge has done for over 100 years. 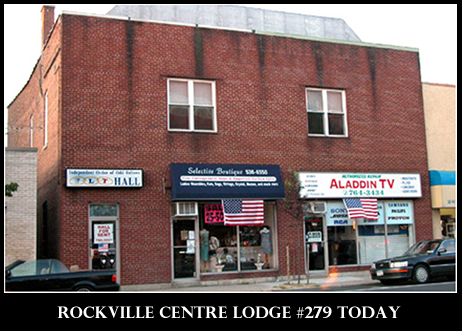